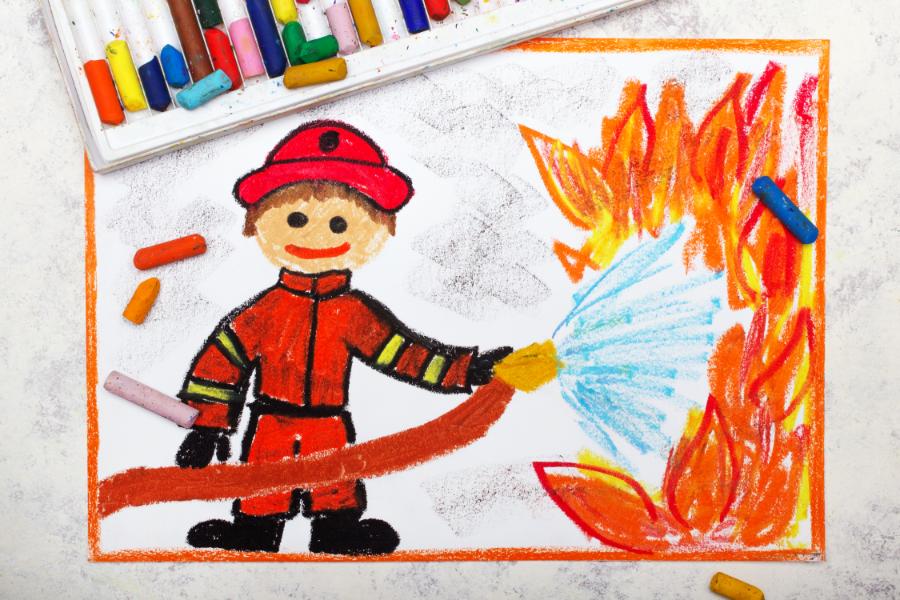 The weather this summer has been hot, so my family has spent a lot of time playing with hoses and water. One afternoon my three-year-old son decided it would be a good idea to hose off the garage, every inch of it. I asked him to stop, I thought it was a waste of water. Then I came to my wits, recognizing that part of being a kid is senselessly spraying down property, so I opened the spigot. Eventually, we created a game out of it called Fire. We pretend the garage is on fire and my son gets to spray it down with water. Simple. However, one afternoon I found him hosing off the interior of my car (which was definitely not on fire) and that’s when I decided we needed some structure.

While I wasn’t thrilled about Henry putting out my invisible dashboard fire, he didn’t know any better and to shut down the game in response to this annoyance would have made him mad (and sad), me the bad guy, and collectively we would have missed a teaching opportunity. I needed to make this a win/win. We needed guardrails.

I told him that he could spray off the garage (exterior only) but cars, the house, and his sister were off limits. If those rules were violated, I had to shut off the hose. The parameters were set and agreed upon. Now Henry gets to live out his childhood dreams of fighting fires, I get so see my son filled with joy, and I no longer have puddles in my car. Win/win.

What’s my point in saying all of this? In Gallup’s 2017 State of the Workplace report, they found that 85% of employees were disengaged. This is not news to anyone. But one of the easiest ways to combat this lack of engagement is to allow your employees to fight fires. Give employees the freedom, within bounds, to create, control, and direct the outcomes of their work. Good employees want – no, crave – growth. They want the opportunity to learn new skills and grow into stretch roles that challenge them intellectually. The question is, are you, as a manager, giving them the reins to do this or are you afraid of letting go, thereby stifling their growth?

I’m going to keep this simple. There is one reason you hire someone: capacity demand. Capacity can be defined as either intellectual or manual. If your company is growing rapidly, you hire because you have more work than you (or your team) can do on your own. If you’re looking for a competitive edge, you may bring in intellectual capacity in the form of programmers and subject matter experts. And finally, you may lose an employee to attrition and after thoughtful consideration, you decide you need to fill the role to keep up with the demands of the business. In any of these situations, how does it benefit you to not let them do their job? Why would you make it harder on yourself by micro-managing the situation?

Let’s explore that question. One of arguments I hear is that you, the manager, can’t afford to fail and you don’t think an employee has the skills to do it right. Ok, that is valid. So how do you make sure someone does it right? You have to provide proper training. I am not suggesting you hire someone and just let them go, my argument is predicated on proper training. You need to put in the effort on the front side to give your employees the tools (technology, access, etc.) to win. For example, I showed Henry how to turn on the hose, adjust the setting on the spray nozzle, and I walked him around the garage so he could see what was in-bounds vs. out-of-bounds. No different for your team.

Second, if you are afraid of failing and don’t trust your new employee, I would ask whether or not you hired the right person. I allow Henry the opportunity to play fireman because he has the physical strength to hold the hose and the mental capacity to understand the rules. My daughter Juliette is too young, she is a bad fit for the job. If you can’t trust your employees to get the job done within the parameters set, then perhaps you need to explore your hiring strategy. To carry my example further, if I hired Juliette for the game of Fire, I am setting myself up for failure as I’m going to have to be there 24/7 making sure she only sprays the garage, doesn’t shoot water in her own face, and doesn’t stroll in the house looking for a snack while the hose is still on. In your case, define some objective measures for the role and if you’ve hired the wrong person, let them go and find the right person. You are only making yourself miserable by continuing a failed strategy. Own the mistake and move on.

Like death and taxes, you and your team will always have fires to fight. Some will be small, some large, some simple and some complex, regardless of the nature, you need to set yourself up for success by establishing guardrails for your employees and then getting out of the way, allowing them to fight those fires for you. Be a great fire chief and focus on the things you need to do while your team is managing the blazes around you. Not only will you gain the adoration of your team, you will get a lot more done and still have time to play Fire back home with your kids.